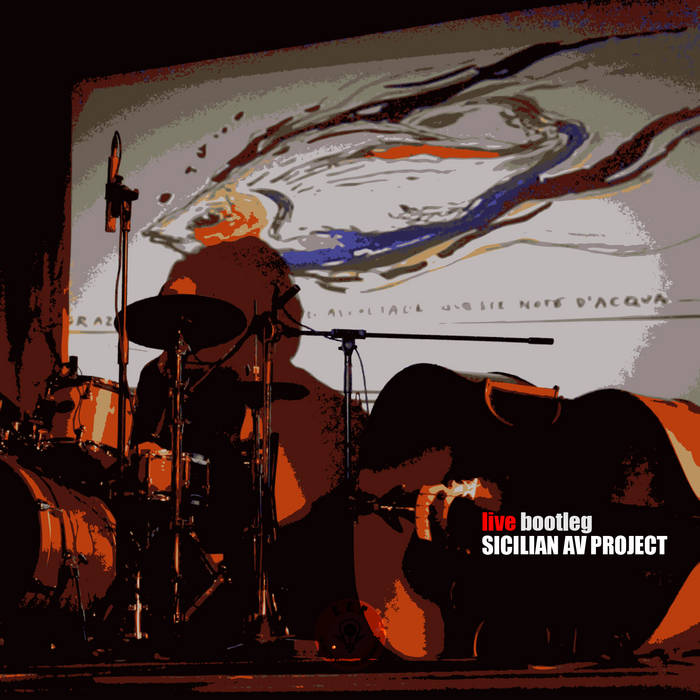 The pirate-like "Live Bootleg" from the Sicilian AV Project show us the dirty, free and funk side of this audiovisual collective, in a live album recorded at the Villa Celimontana Jazz Festival concert in Rome (August 4th, 2008) and at the Teatroclub Nando Greco in Catania (March 21st, 2008).

A live album that would appear to be no more than a relaxing night beside the lake if it were not for the darkest horrors appearing here and there like a shark's fin. The first incursions into this terror arive when the music clearly evokes (in a tribute to Ignazio Buttitta, sicilian poet, with Luca D'Aversa playing vocals and acoustic guitar) two key-role elements of Sicily, the mafia and the priesthood ("Mafia e Parrini"), with their threats (rifle or hell) and their skirmishes as lovers. After this track peace seems to return, meditation, quiet melancholy, until another shark's fin: "Borseggiatori", a genial track that samples an Italian TV news programme about the theft of Paolo Borsellino's personal agenda (Paolo Borsellino was a magistrate killed by the mafia in 1992) just after the bomb massacre that killed him and his escort. A musical crescendo full of graveness and pain underlined by a violent, unbelievably urgent rhythm.

After this storm, it is once again time for reflection, for sad calm, for melancholic milongas like the Astor Piazzolla cover "Oblivion", with the Anemos saxophone quartet. But then, zak! - "Concatenazione (live)" - back comes Leonardo Sciascia, Sicily as a metaphor (or a metaphor as Sicily?) and the nightmare creatures gasping everywhere on the borders (or in the center) of our existence. It is in this travelling back and forth between beauty and horror, art and death, that we find the the realistic mastery of the Sicilian AV project.